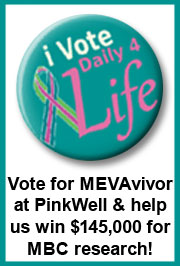 About a year-and-a-half ago, at the end of 2010, I became friends in cyberspace with a blogger named Rachel. She had left an endearing comment on my blog, for a post that was not directly about breast cancer, as it happened, but about losing my 15-year-old dog, Foxy. That post was called Foxy’s Tale – Chapter Two. As is true for many of us, my pets were a constant source of comfort, unalloyed love, and joy during my treatment for breast cancer. What made Foxy so special to me was that he showed up in my life as a frightened, half-wild stray, and, despite his understandable terror, arising from a background of abuse and neglect, he chose to stay with me, to trust me to care for him and treat him with kindness. He rewarded me with love and loyalty, and taught me many lessons in how to face fear, lessons I would need when I was diagnosed.

Rachel and I became fast friends in cyberspace, and not many months later, we became friends in real life, too, meeting up at a National Breast Cancer Coalition conference. We were then able to add several layers to our friendship — phone calls, Skype conversations, texts and emails, and mutual conspiring on our respective blogs. I had already lost friends to MBC by the time I’d met Rachel, but she and her blog raised my awareness of it exponentially. Back in February of 2011, she asked our own CJ to write a guest post about one of Rachel’s most passionate concerns — the urgent need for more research on MBC. That post, Trying To Stay Alive On Two Percent, was widely read and widely shared. And it spurred me and many other bloggers and activists to demand more accountability, reality, and parity for MBC in fundraising, awareness, support services and research.

Several times during 2011, after our first meeting, Rachel and I tried to figure out when I might drive down to visit her. We were only hours away from one another by car. But the ever-present, ever-changing circumstances of MBC always seemed to get in our way. There were multiple hospitalizations, more chemotherapy, more pain, more side effects, pericardial infection, collapsed lungs, disability, body-slamming fatigue, an endless list of miseries that Rachel had to endure to stay alive. She didn’t want me to visit her when she was at her worst. She wanted me to visit when she was well enough to enjoy herself, to laugh, snark, play together, and, of course, eat chocolate. And who can blame her?

Finally, near the end of last year, Rachel decided that, mets be damned, she was going to plan a weekend when a small group of her friends could come and visit. And we settled on the second weekend in March, 2012. Donations of pie and chocolate notwithstanding, Rachel decided to have our meals taken care of by a local caterer. All of us arranged for time off and transport. One of us was flying over from England. But shortly after we were finalizing our plans, Rachel was hospitalized again, this time in ICU. She was having monstrous headaches and seizures. She couldn’t eat. She was in and out of consciousness. Finally, at the end of the week, she was stabilized and was allowed to move to a regular room. She was awake, her pain was under control, and she was eating. We were all cautiously relieved, having seen her pull through so many previous crises. But a few days later, on Monday, February 6, 2012, her husband told us all that Rachel had died. And instead of driving to a weekend of fun and camaradery amidst a group of joyful friends, I drove to her memorial service to deliver a eulogy. It was just one among many on that shattering day.

Despite the hundreds of breast cancer awareness groups out there, it continues to come as a shock to many that up to 30% of the women and men diagnosed with breast cancer will develop MBC. And that 30% does not include the 6-10% of patients who initially present at stage IV. Even worse, it is beyond shocking that only 2% of all research funding for cancer is spent directly on learning to stop Stage IV cancers. There is still no such thing as genuine ‘prevention’ for breast cancer. At best, there is only early detection. And yet many breast cancer organizations still tout prevention as if it were a reality. As recently as last month, reports were published on a vaccine that promises to prevent breast cancer recurrence of HER2-positive tumors [http://news.health.com/2012/04/02/early-study-hints-that-breast-cancer-vaccine-might-work/], but this is far from real prevention for all breast cancer. The National Cancer Institute does list several clinical trials for breast cancer vaccines, some of which, I’m glad to say, are aimed at metastatic breast cancer. But the path from clinical trials to available, effective treatment may be years long, and come too late for many.

Meanwhile, we have a long way to go. One thing we can do, starting today, is to demand parity for MBC in all aspects of breast cancer support, treatment and research. That is what METAvivor’s “Thirty for Thirty” campaign is all about. Right now, you can help in a concrete way by voting for METAvivor in PinkWell’s current grant challenge. Between now and May 15th, you can vote by email, by signing in with your Facebook or Twitter ID, or all three, every single day, to give METAvivor a chance to win a grant of up to $145,000, which we can then award to research on MBC. If you would like to post our Thirty For Thirty badge on your blog or website, the image link is http://accidentalamazon.com/metavivor/VoteButton.jpg and the link for PinkWell is http://www.pinkwell.org/voting/#applicant-96. You can then copy and paste them, and link the image with the PinkWell link to vote for METAvivor.

Whatever you can do, it will be appreciated. I miss Rachel. And Elizabeth, and Deb, and Betsy, and Daria, and Susan, and Nicki, and Jane, and too many more. I’m voting for them and for all of us.