BY METAvivor Board of Directors 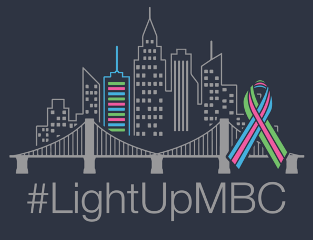 PORTSMOUTH, NH & NEW YORK, NY, OCTOBER 7th, 2019 – Moore Fight Moore Strong (MFMS) – an organization with a mission to carry on the legacy of their best friend, Jessica Moore, to raise awareness for Metastatic Breast Cancer (MBC) – has worked to unite over 70 locations across the globe to illuminate major landmarks in green, pink and teal to raise awareness for Metastatic Breast Cancer on and around MBC Awareness Day on Sunday, October 13th.  The “Light Up MBC” campaign has been initiated in support of Annapolis-based non-profit METAvivor Research and Support, Inc.

The Memorial Bridge near Jessica’s hometown of Portsmouth, New Hampshire was the first landmark to light up for the disease in October 2017, just five months after Jessica’s passing at the age of 36. Prior to Jessica’s passing, she said she thought it would be amazing to light a landmark for MBC to raise awareness for METAvivor Research and Support and that conversation has guided us to take this internationally.

“Lighting landmarks doesn’t help the cause if people don’t understand the reason behind it,” stated Laura Inahara, Executive Director of Moore Fight Moore Strong. “That is where the help of the public is necessary to share our current social media posts about the lightings and to create their own both prior to and on the evenings of the lightings. Directing the public to our social media as well as their own local media outlets is important to continue to bring awareness and educate the public on MBC and the lack of research funding.”

Moore Fight Moore Strong is asking the public to visit one of dozens of participating landmarks on the evening of their local lighting, take a picture, and post it publicly to social media using the hashtag #LightUpMBC, #METAvivor. If you cannot get to a lighting, simply use Google Earth to screenshot a landmark and post your pic.

Why is this important? Often in a month filled with pink celebrations, the Metastatic Breast Cancer community feels forgotten. Metastatic Breast Cancer (often also referred to as Stage IV) is breast cancer that has spread beyond the breast to other organs in the body typically the liver, lung, brain and bones.  There is no cure for Stage IV MBC and the life expectancy of men and women diagnosed with the disease is, on average, 24-36 months. “Bringing awareness to MBC is critical. There are 114 people that die of MBC every day. This is often not discussed,” said Inahara. “While 30% of early stage breast cancer patients will metastasize, only 2 to 5% of all breast cancer funds raised go to Stage IV breast cancer research to find a cure, or make the disease a lifelong manageable illness. Over 42,000 lives are taken annually by this disease.”

Said Inahara, “Jessica encouraged us all to advocate because she knew the more we talked about MBC, the more people would understand it and that would result in advocacy for change. Education is key. There is often a misconception that there is a cure for breast cancer and we want to educate anyone who will listen, that there is not presently a cure. We would like the public to reconsider where they are investing their charitable donations and consider METAvivor Research and Support Inc., as they remain the only U.S. organization dedicated to awarding annual, peer reviewed, Stage IV breast cancer research grants.”

If you are responsible for a landmark that lights and want to join the #LightUpMBC initiative, contact Laura Inahara, Executive Director, at [email protected]

About METAvivor and the Origin of the Metastatic Breast Cancer (MBC) Ribbon:

METAvivor is dedicated to the specific fight of men and women living with Stage IV metastatic breast cancer It is a volunteer led, non-profit organization that solely funds Stage IV MBC research to help improve the longevity and quality of life for MBC patients.

“The pink ribbon is well-known for representing the fight against breast cancer, but many Stage IV breast cancer patients feel that pink does not encapsulate their experience. Metastatic Breast Cancer may start in the breast, but its spread to vital organs makes the disease fatal. To highlight the uniqueness of the disease and show its commonality with other Stage IV cancers, METAvivor designed a base ribbon of green and teal to represent metastasis. Green represents the triumph of spring over winter, life over death, and symbolizes renewal, hope, and immortality while teal symbolizes healing and spirituality. The thin pink ribbon overlay signifies the metastatic cancer originated in the breast.”

For more information on METAvivor and to donate, visit www.metavivor.org and follow METAvivor on Facebook at www.facebook.com/metavivor.

In 2013, Moore Fight Moore Strong (MFMS) was formed by family and friends who joined forces with a mission to support Jessica Moore, who in April 2013, at age 32 was diagnosed with Stage IV Metastatic Breast Cancer (MBC). Since inception, MFMS has grown larger than we could have ever imagined. We all united together to support Jess' mission to raise awareness to Stage IV MBC.  In May of 2017, Jessica passed away after a courageous four-year battle.

Participating cities, landmark locations and dates of the lightings (as of 10/02):