Kohl’s Unwilling to Do the Right Thing 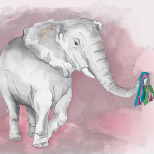 As our supporters are aware, on Friday February 21st METAvivor contacted Kohl’s concerning it’s co-optation of METAvivor’s Elephant in the Pink Room Campaign.  At that time we were told the President of Kohl’s would call by the end of the day.  That did not happen.  With tremendous help from many supporters, a social media campaign was launched forcing Kohl into action.  On Thursday, February 27th, Kohl’s Senior Vice President of Marketing called METAvivor President Kelly Lange to talk.

In the end, Kohl’s was only willing to add some information on metastatic breast cancer to their website.  We gave them a deadline of 5 pm CST today to respond to our insistence that they also remove the images of and references to an elephant along with the words “Don’t Ignore It”, which in conjunction with their elephant co-opted METAvivor’s “Don’t Ignore Stage IV”.  That deadline has now passed with no word from Kohl’s.

METAvivor has also received a letter from Susan G. Komen’s President, Dr. Judith Solerno, but she too has shown no inclination to change the campaign.  It is quite ironic that Susan G. Komen, with its well-earned reputation for vigorously defending its own brand through litigation, appears to have no compunction with regard to infringing upon the brands of others.

As we look into legal action, we encourage our supporters to re-launch their media campaigns.  For those looking for inspiration we invite you to read Gayle Sulik’s blog -- The Pink White Elephant.  Gayle A. Sulik, PhD is a medical sociologist and author of the book, Pink Ribbon Blues -- a very revealing history of breast cancer advocacy.  She is also co-founder and executive director of the newly founded Breast Cancer Consortium, a collection of international professionals committed to research and social change.