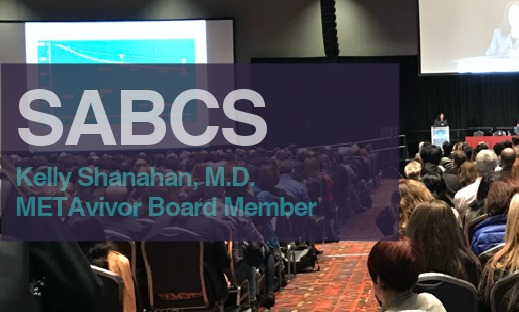 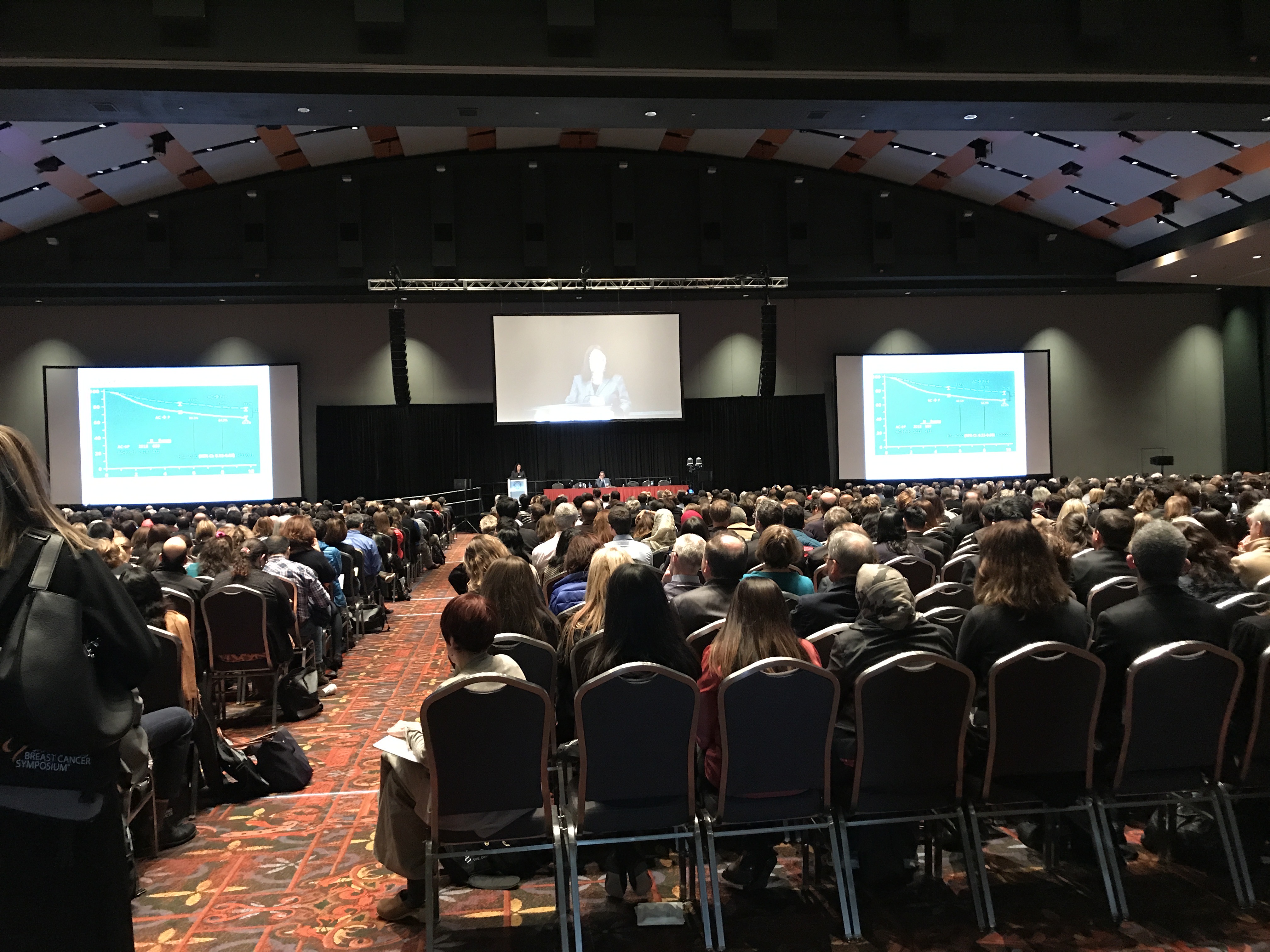 The largest breast cancer conference in the world is the San Antonio Breast Cancer Symposium (SABCS), which began as a regional one day conference in 1978 and has since expanded to a 5 day event attracting oncologists, researchers, and, yes, advocates from all over the world. For those without a scientific background – heck, even for people like me who are doctors (but not oncologists!) - it can seem overwhelming, if just from the standpoint of deciding which sessions to attend and which posters to view. And, for those counting steps, you will have no problem getting in 10,000+ a day! 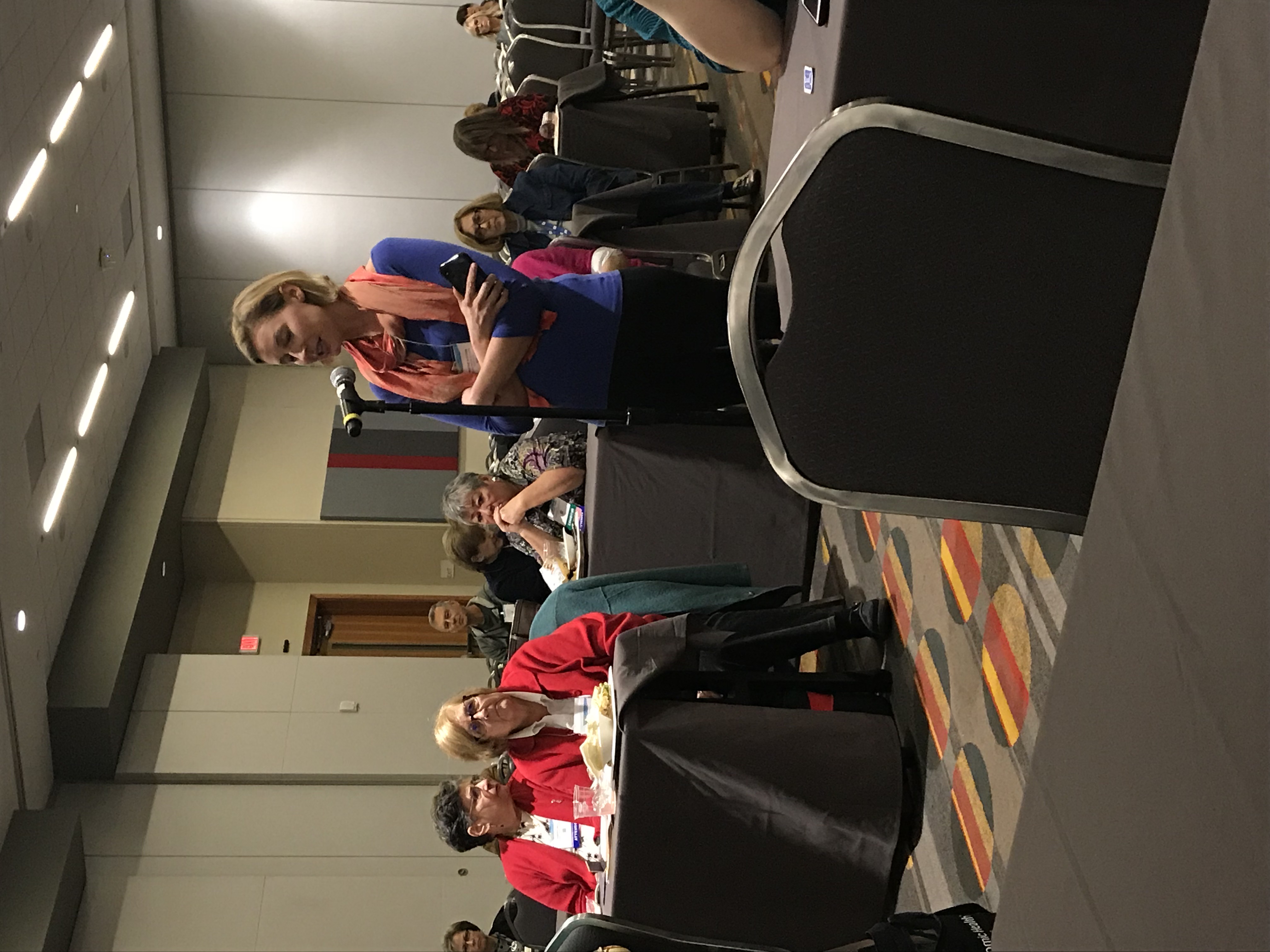 SABCS has been partnering with the Alamo Breast Cancer Foundation to provide advocate specific programming for over 20 years. There is a formal educational program for a couple of dozen advocates, with scholarships available, that requires attendance at certain sessions and preparation of a report on a specific poster or session, as well as activities that are open to all advocates in attendance. These include a session with the American Association of Cancer Researchers (AACR) on the science of breast cancer; interactive Q&As with the FDA and NCI; and the not-to-miss evening Hot Topics Mentor Sessions. Hot Topics comprises a panel of 3 or 4 experts – well known people like Drs. Susan Love, Matthew Ellis, and Julie Gralow – who present the most important information from that day’s session, and who then take questions from the advocates in the audience. Often, quite lively discussions are generated – and there’s free dinner! 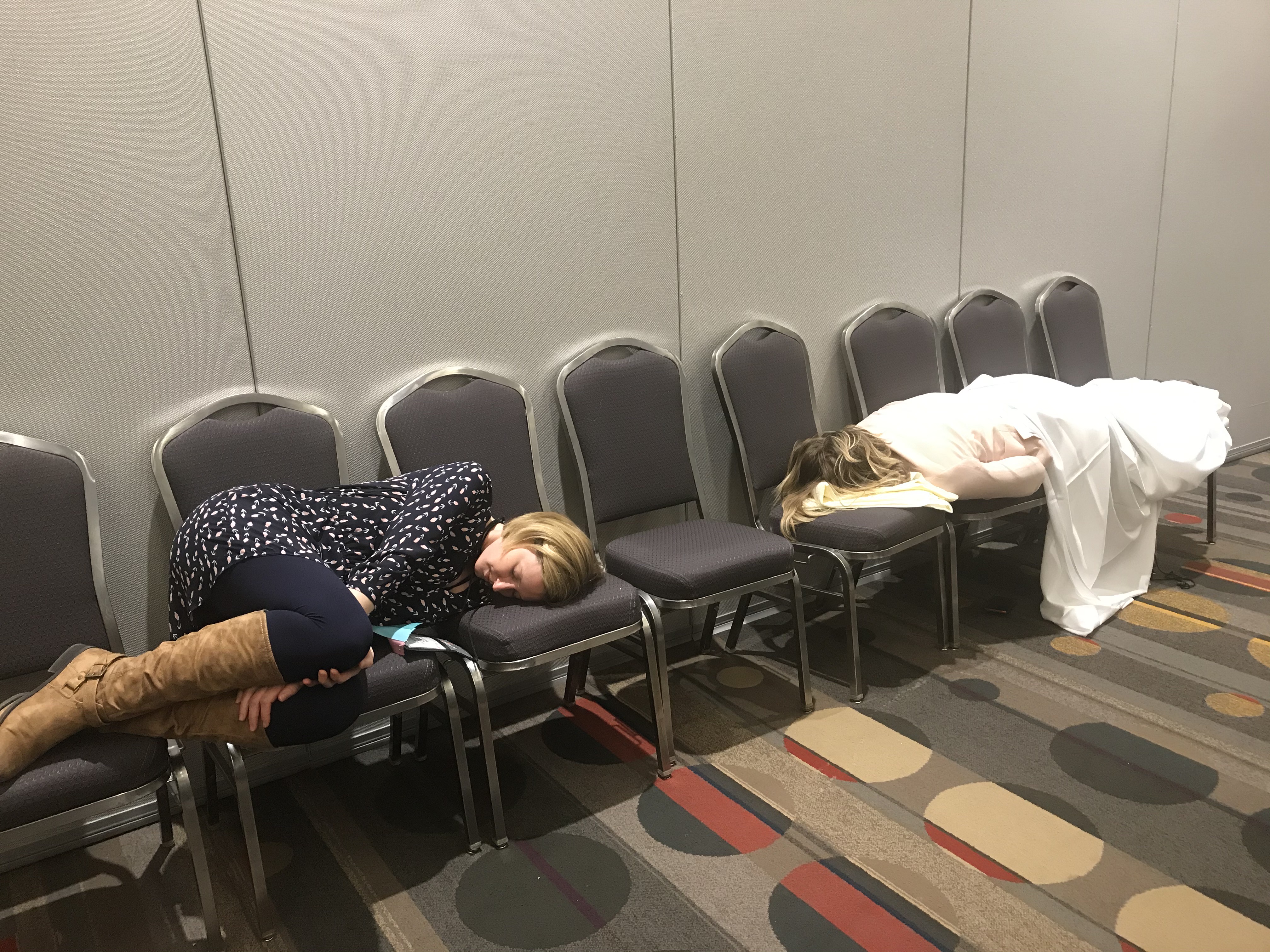 The best part about attending SABCS is the opportunity to meet fellow advocates. In 2019, for the first time, there was an advocate lounge where we could hang out, grab a snack or a bottle of water, or, like two friends, stretch out across a few chairs and take a much needed nap! The opportunity to casually network can lead to dividing and conquering the multiple sessions and posters on a particular subtype (it’s impossible to see and do everything alone) or collaborating on future projects – or making a new best friend. 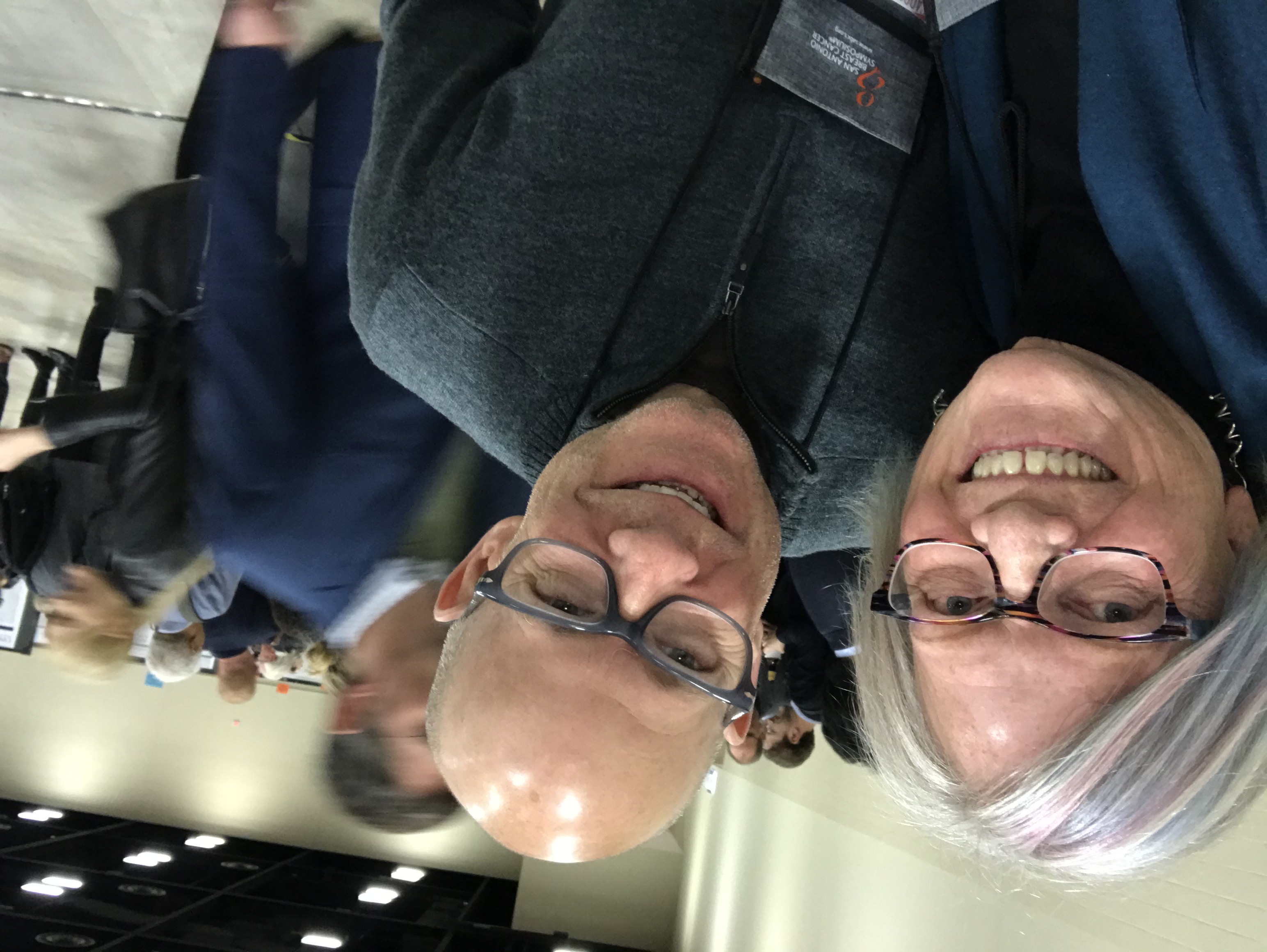 Researchers and clinicians are extremely approachable at SABCS, after sessions at which they were the featured speakers and especially during the poster sessions. For poster sessions, think an indoor football field (or two!) with rows upon rows of display boards where researchers hang posters describing everything from basic science experiments to updates on ongoing clinical trials.  Sometimes those poster presenters are fellow advocates too! And don’t be shy about asking questions of the presenters: they may be the experts in the science of MBC or treating MBC, but we are the experts in living with it. 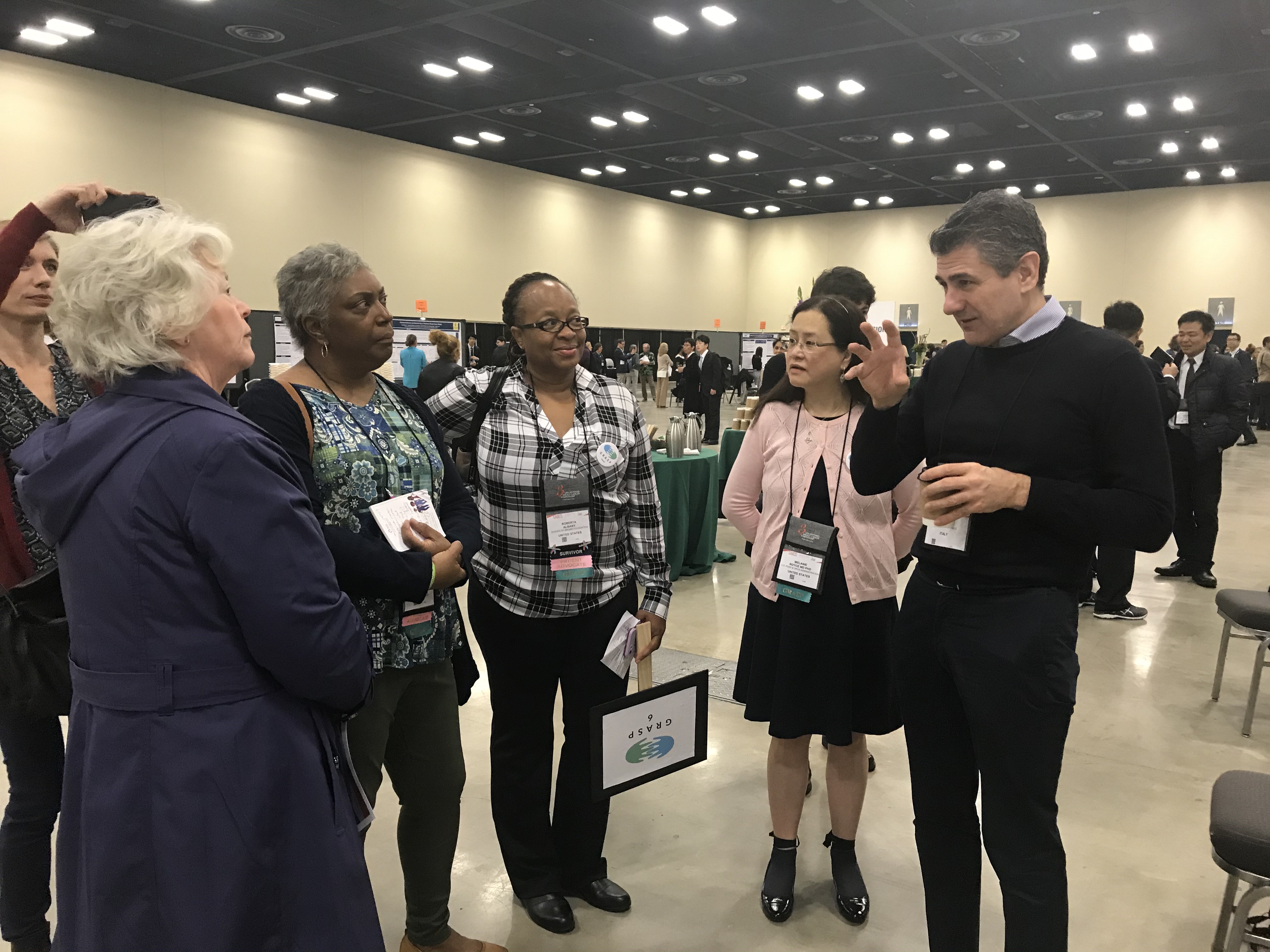 One of the newest (and best!) ways to experience the posters is through GRASP (Guiding Researchers and Advocates to Scientific Partnerships), an initiative started at SABCS 2019 by Christine Hodgdon and Julia Maus, kickass women living with MBC. In GRASP, a scientist/clinician and an experienced advocate take a small group of advocates to select posters to talk with the presenter. The presenters, who may not have any direct patient contact in the lab, are reminded of why they are doing their research and we not only learn about what’s up and coming, we may actually influence the direction research is taking through our comments and questions. And in the poster hall you might even run into the surgeon who did your bilateral mastectomy when you were first diagnosed with early stage disease!

2020, of course, threw a monkey wrench into everything, including conferences, and SABCS moved to a virtual platform. For IRL SABCS there are significant expenses (registration fees travel to San Antonio, hotel, etc), plus the impossibility of travel for many with MBC, thus limiting the number of advocates who can attend. But for the virtual 2020 meeting, SABCS waived advocate registration fees, allowing anyone, anywhere to “attend”; of the 9331 virtual attendees, 599 were advocates, a massive increase over past in person meetings! Another advantage of a virtual meeting is that sessions are recorded, eliminating the need to clone oneself to attend simultaneous sessions and allowing for the ability to rewatch as many times as needed to fully comprehend the information presented (although some of us still haven’t watched all sessions we bookmarked!). The Alamo advocate sessions, including Hot Topics, were also online, with chat features to ask questions of the panelists, and were recorded as well.

While I hope we will be able to gather in person again, for nothing can replace hugs from friends old and new, I also hope that free virtual content will remain to allow more advocates to participate in this mother of all breast cancer conferences. And whether we gather again IRL or across computer screens in 2021, one of the best ways to follow SABCS (or any other medical meeting) is via Twitter. #SABCS20 was the most recent hashtag – and you’ll find content from researchers, oncologists, and advocates (find me @stage4kelly)

So, what are some of the biggest takeaways for the MBC community from #SABCS20? Frankly, there was nothing earth-shattering this year, mainly updates on some pretty exciting new options first reported in 2019 or at ASCO in the summer of 2020. Here’s my take, broken down by subtype?

CONTESSA, an early phase trial, of an oral taxane, tesetaxel, in combination of a lower than usual dose of capecitabine (Xeloda) compared to only full dose capecitabine showed an improvement in progression free survival (PFS, the amount of time before disease progresses) from 6.9 months to 9.8 months. BUT, there was significant toxicity with the combination, especially with low white blood cell counts, and the question remains unanswered whether this was due to the combo. What is needed is a trial of tesetaxel by itself.

Encequidar plus oral paclitaxel. This is a different oral taxane than tesetaxel and it isn’t very well absorbed, so it has to be taken with the encequidar to achieve effective levels in the body. This study compared this combination to IV paclitaxel and found a 26.5% decrease in deaths. There was also a lower incidence of neuropathy.  Sounds great, right? Not so fast: the study was conducted in Central and South America and the IV paclitaxel was given every 3 weeks, a dosing schedule that has been proven to be inferior to the usual 3 weeks on/1 week off schedule that is used in the US and other countries in people with MBC. Also, it is almost a full time job to take these pills: one must fast for 4 hours, then take a capsule of the encequidar, then wait another hour (still fasting!) and then take an average of 10 (TEN!!!) paclitaxel tablets and then fast ANOTHER 4 hours!!!! This is done for 3 consecutive days each week.  This trial needs to be repeated comparing these oral meds to the standard IV paclitaxel dosing schedule to see if there is really a survival benefit. There are upsides to oral meds, especially in populations that do not have easy access to infusion centers, so encequidar and oral paclitaxel shouldn’t be dismissed altogether, but it is not a home run.

Late 2019 and early 2020 brought exciting new options for people with HER2+ MBC with reports of success with HER2CLIMB (tucatinib, aka Tukysa) and DESTINY (Trastuzumab deruxtecan, aka Enhertu) that led to FDA approval of these drugs. An update on DESTINY presented at SABCS20, in people with an average of 6 prior lines of therapy, showed continued improvement in PFS and OS (overall survival, or time to death), with PFS now at 19.6 months and OS at 24.6 months – and counting.  Enhertu is not without its issues, however; it can cause inflammation and scarring in the lungs, and one person on the trial died from this. When will we get drugs that work great and the only side effect is our hair gets glossier and we achieve our ideal body weight??

An update on the SOPHIA trial of margetuximab, FDA approved in December 2020 for HER2+ MBC that has progressed on prior HER2 targeted therapies, was also presented. Margetuximab shows improvement in OS from 19.8 to 21.6 months– less than 8 weeks - and is, IMO, overhyped. We deserve better than weeks.

Sacituzumab govetecan (Trodelvy) continues to do well in an update from the ASCENT trial, where the volunteers (aka heros) in the trial had had 2+ prior lines of therapy. This drug targets TROP-2 and in a subgroup analysis based on whether people had low, medium, or high expression of TROP-2, Trodelvy doubled OS to 12 months regardless of TROP-2 expression; those with the highest levels of expression did have the longest survival. This is the first targeted therapy for TNBC and is exciting news, although as always we need even better options.

Another update was from KEYNOTE 355 for those with TNBC who are PDL1+. In KEYNOTE, which was a first line trial (no prior treatment for MBC), trial heros received chemotherapy with or without pembrolizumab (Keytruda), a form of  immunotherapy. In this analysis, people who were PDL1+ were broken down into two groups: 1) PDL1+ of >1 and 2) PDL1+ >10. While both groups receiving Keytruda did better than those who were PDL1-, the group with higher expression did the best, with a 4.1 month improvement in PFS. Keytruda was approved for metastatic TNBC in November 2020 based on the results of KEYNOTE. Again, a needed new option but the metastatic TNBC population is still waiting for drugs that measure PFS and OS in years, rather than months.